What is a Calque?

One way in which the English language is enriched is the acquisition of calques, or literal translations of foreign words and phrases. This post lists and defines calques from various languages.

From Chinese comes brainwash, meaning “manipulate someone to change their beliefs,” from the notion of one’s brain being cleaned out and the information stored within replaced with other data, as well as “lose face,” meaning “suffer from a loss of dignity or prestige” and related to “save face,” which means “preserve one’s dignity or prestige.” (The Chinese and Japanese languages each have nearly one hundred phrases alluding to face in this sense.) Another calque from Chinese is “paper tiger,” which, in reference to a depiction of a fierce animal that is itself harmless, metaphorically refers to an empty threat. 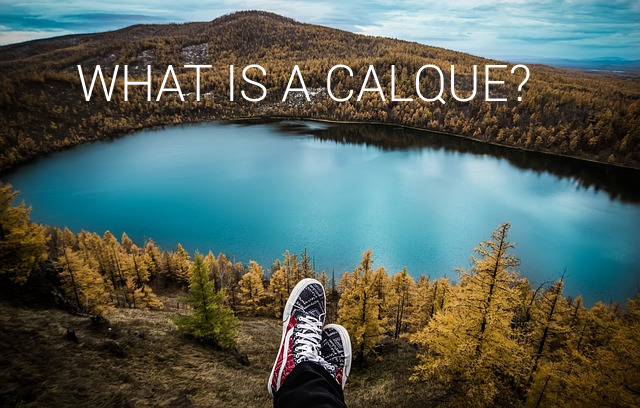 Calques based on French terms include “flea market,” from the notion that items bought used at open-air sales are flea ridden, and rhinestone, from a French term meaning “Rhine pebble,” so called because the imitation gems were invented near the Rhine River. Meanwhile, the expression “That goes without saying,” meaning “That’s obvious,” is from a French expression.

Worldview, which literally refers to one’s perspective about the world, is a calque of the German term weltanschauung, which is itself sometimes employed in English. Because of the influence of Germany on science and philosophy as well as politics, English has also borrowed such translations of German terms as antibody (“a substance produced in cells that protects the body from disease”) and “thought experiment” (“an experiment conducted in one’s mind”).

From Latin, English acquired the calques commonplace, meaning “obvious or commonly found,” the phrase “in a nutshell,” meaning “in brief” (from the notion that what is said will “fit” in a small space), and “wisdom tooth,” which refers to the hindmost teeth, so called because they do not appear until one is at or near adulthood.

Spanish is the source of the calques “blue blood,” meaning “aristocrat” (from the notion that people of high social standing spend little time outside and, because they are pale, their veins are visible), “fifth column,” which refers to those within one country who engage in espionage or sabotage on behalf of that country’s enemy, and the phrase “moment of truth” (“critical time”), which originally referred in Spanish to the climax of a bullfight.

Notice: If you have published a book or ebook about grammar, punctuation, style or writing in general, please let us know via the email info@dailywritingtips.com. We are planning a new section with book reviews and would love to consider yours.

4 Responses to “What is a Calque?”