How to Write Your First Screenplay

Have you ever daydreamed about writing for the big screen? I know I have! Writing a screenplay that gets picked up by Hollywood could see your story reach millions of people – whereas even bestselling novels often only sell in the tens of thousands.

Writing a screenplay is very different from writing a short story or a novel, though. There are some specific conventions that you need to know about, in terms of the structure of your story itself, and in terms of how you lay it out on the page.

I’m not going to attempt to give you an exhaustive guide in a single blog post – but I’ll take you through all the basics, and give you plenty of links to further reading so you can dig deeper on particular areas of screenwriting that interest you.

What’s the Difference Between a Screenplay and a Script?

Scripts for plays are laid out slightly differently. They’re designed to be performed live, rather than pre-recorded and shown on a screen. They’ll include stage directions (like “Exit, stage left” – or Shakespeare’s famous, “Exit, pursued by a bear”).

Screenplays are scripts for something that will be filmed and later “screened” – shown in the cinema or on TV. They’ll often include instructions for specific shots – e.g. “CLOSE UP”. Assuming that you’re writing for film, they’ll also have specific length requirements.

Coming Up With an Idea for a Screenplay

Just as with any type of fiction you write, having a strong idea is essential. Your screenplay should be able to be summed up in a “logline” – a one-sentence summary of the plot. This logline should include:

As James Burbridge says, in a great post about constructing a logline:

If you can’t write a decent logline of your idea before embarking on the script, then maybe reconsider writing that thing. If it’s unfocused and muddled at the loglines stage, it’s not going to get any better as you write.

If you’re short of ideas, you might look for inspiration from:

Your idea needs to be something that will take about 100 – 120 minutes to play out on screen. A minute on the screen equates to about one page of script … so that means that your screenplay should be between 100 and 120 pages (when laid out with proper formatting, which we’ll come onto in a moment).

Planning and Structuring Your Screenplay

All writing has structure, and if you’ve written so much as a short story, you’ll know how important it is to have a beginning, middle and end.

Screenplays have a more detailed structure, though. You might think this is restrictive – but there’s a lot you can do within this structure, and it’ll help you shape your ideas so your story doesn’t drag.

Act I – roughly the first 25% of your screenplay. (20 – 30 minutes on the screen.) This is often called the “setup” – it’s where you introduce your characters and their world and get the story started.

Act II – the middle 50% of your screenplay. (Up to an hour on the screen.) This is often called the “confrontation” – it’s where you complicate the story and the tension rises.

Act III – the final 25% of your screenplay. (A final 20 – 30 minutes.) This is often called the “resolution” – it’s where there’s a confrontation between the protagonist and antagonist (or antagonistic force) and – normally – the protagonist prevails.

Within these acts, there are particular points that you’re expected to hit at specific stages:

For instance, in the story a suburban mother of two must save her husband from a deranged and deadly neighbour, the first turning point might be the neighbour threatening or even attacking the husband.

For instance, this second turning point might have the neighbour kidnapping one of the children: the mother needs to rescue her child and protect her husband.

There are plenty of other “points” that screenwriters are advised to meet, though you’ll probably find there’s some debate about what exactly these are! There’s a good breakdown of the five-point structure here, which you might want to follow.

Laying Out Your Screenplay on the Page

For your screenplay, you should use the font Courier New, size 12. Why? Because that way, all scripts fit the same number of lines on a page – making it easy to estimate their run-time from the page count. (Courier is a fixed-width font, so each letter takes up the same amount of space.)

Here’s how the first few lines of a script might look: I’ve annotated it with some notes about the way in which it’s laid out. 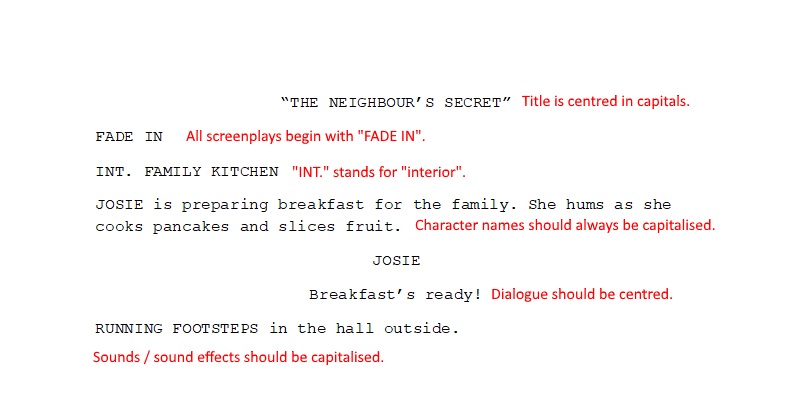 The easiest way to make sure you’re formatting your screenplay correctly is to use specialised software:

Each of these offer a free trial, so you can give them a try before deciding whether or not to purchase them.

Writing a screenplay is no small undertaking – and we’ve only covered the basics of what you need to know.

If you want to go further with your screenwriting journey, check out some of these great resources:

How to Write a Screenplay, WikiHow

While I sometimes find WikiHow’s articles low-quality, this is a great in-depth piece that’s been expertly reviewed and carefully put together. If you want a step by step, very beginner-friendly introduction to writing a screenplay, give it a read!

How to Write a Screenplay You Can Sell, Stephanie Palmer, Good in a Room

This honest, practical article explains what you need to do to write a good screenplay – from choosing one genre to watching the same movie over and over again to get to grips with structure. If you’re serious about screenwriting, give it a read.

This is a detailed, reassuring article about writing a screenplay, with lots of specific details on layout as well as some helpful tips on length and even on binding and presenting your script.

How to Write Your Screenplay in 24 Hours – Advice from a Hollywood Screenwriter and Producer, Dr. Kenneth Atchity, TCKPublishing

In this post, you’ll find two really useful resource: precise instructions on what should happen by different points in your screenplay (with page numbers, for a 115 page script), and a nifty way to chart the rising and falling intensity of different scenes in your screenplay.

10 Screenplay Structures That Screenwriters Can Use, Ken Miyamoto, Screencraft

If you’d like to look at some different ways to tell a story, going beyond the three-act structure, this post is a great place to begin. Throughout the post, there are examples of each type of structure, with tips on what types of story each one will work best for.

2 Responses to “How to Write Your First Screenplay”