I’m inured to ineptly expressed messages on parking signs, but the signage reproduced here prompts a ticketing spree by the spelling police. 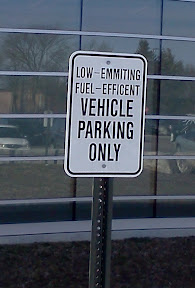 What, exactly, is a low-emmiting, fuel-efficent vehicle — can it park there if it’s magn-efficent? — and how do you know whether you have one? This sign should read “Low-Emitting, Fuel-Efficient Vehicle Parking Only.” 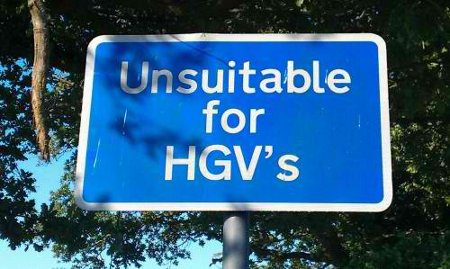 Sign makers in the United Kingdom are so polite! They ever so regretful that they must inconvenience you by informing you that this parking area is unsuitable for HGV’s. (In other words – to translate for Americans — don’t park your semi here, bub.) That’s a charming sign, but an apostrophe and an s signals possession; an s alone indicates a plural, and that’s what “HGVs” is. Therefore, the message invites the question, “Unsuitable for HGV’s what? And who is HGV?” 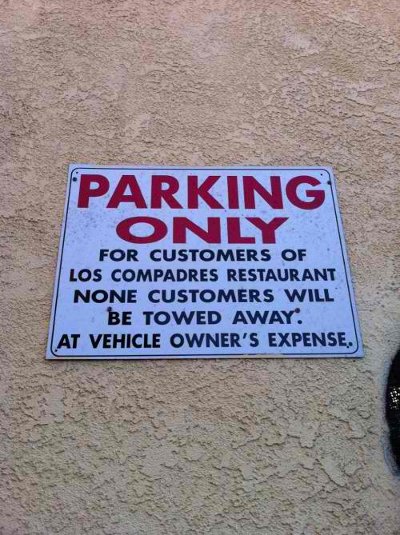 That’s comforting to know that none customers — I guess that means “no customers” — will be towed away. (Sometimes, after I dine at a Mexican restaurant, I feel like I need to be towed away — or, better yet, hoisted onto a flatbed truck.) Oh, I get it now: noncustomers. What really clinches this failure of a sign is the gratuitous period after away, and the resulting fragment that follows. 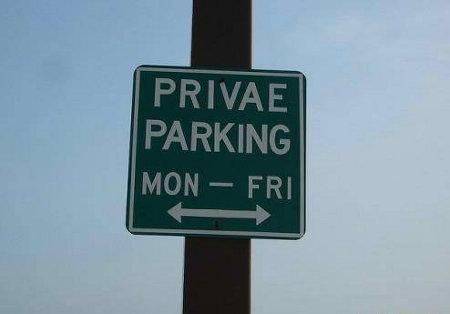 What’s a privae, and how does one park it (or them, as the Latin plural appendage -ae seems to indicate)? How kind of the sign maker, by the way, to refrain from taking up all that space on the weekends with a fleet of privas. 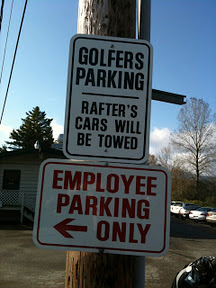 Here, two possessive nouns are rendered erroneously in different ways: They should read Golfers’ and Rafters’ (unless, of course, the sign is targeting a single rafter). 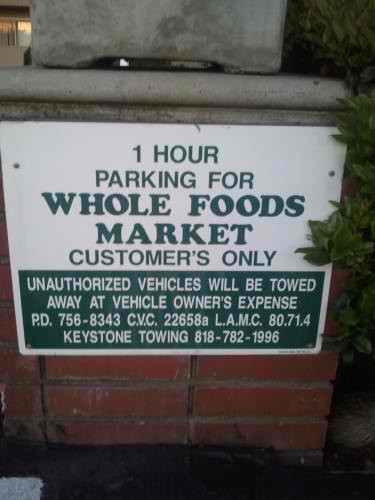 Customer’s only what? We expect better of a progressive international grocery store chain. (And “1 hour parking”? I know that commercial advertising is inimical to hyphenation — that is perhaps the most ubiquitous signage error — but, really, does Whole Foods Market have to be as careless as every other merchant?) 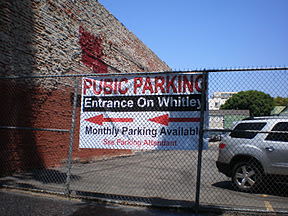 You had to see this one coming: otherwise known as privates parking. (Entrance on Whitley, printing by Witless.)

These images are from the websites Apostrophe Abuse, Funny Typos, and The Great Typo Hunt.