5 School Signs That Earn an F

Everyone has an eye-rolling story about a teacher who misspelled words on the chalkboard or on printed assignment sheets, but a school’s marquee is too often is the scene of the crime when it comes to high-profile errors, too. The following photos document such transgressions. 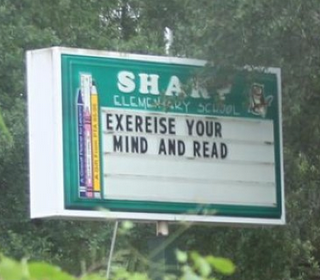 Sometimes, these letter kits lack enough letters to go around, or some get lost, and ingenuity prompts the letterer to improvise with a letter that looks similar to one that’s missing. This isn’t one of those times — or it shouldn’t have been. The person who posted this sign obviously didn’t heed the advice. The statement reads awkwardly, too; I would have written, “Exercise your mind: Read.” Maybe the letter set lacked a colon, but they could have used a dash instead. (But they probably would have mistakenly used a hyphen, resulting in “Use your mind-read.”) 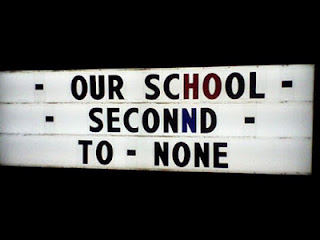 Too bad the person responsible for posting this sign didn’t take a “seconnd” look at the negating note. And using hyphens as a decorative motif was ill advised. 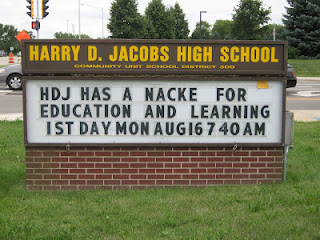 What HDJ has a “nacke” for is not paying attention to the little things — like how to spell knack. I’d like to give HDJ the benefit of the doubt and assume that this photo was taken immediately after the sign was posted, and that it was immediately corrected. But how many of you have seen errors like this go uncorrected day after day? 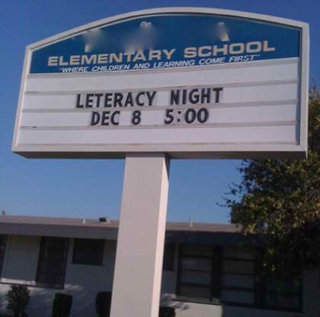 Imagine the blushes ’n’ chuckles at this event. The people responsible for posting these signs are administrative staff — or, in the case of a sign like this, which requires a ladder for access, likely a custodian — who are often less well educated than principals and teachers, but aren’t they provided with a memo or at least a handwritten note showing the exact wording (and lettering)? Guess not. 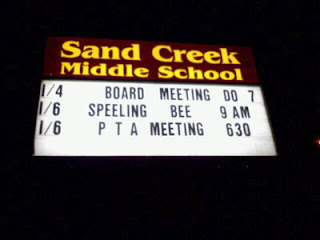 The images above are coming from the Writer’s Keep and English Fail Blog.

19 Responses to “5 School Signs That Earn an F”