How to Play HQ Words: Cheats, Tips and Tricks

Word nerds rejoice! Imagine a word game where you can have fun and win cash prizes by leveraging your vast vocabulary. Well, it exists, and it is called HQ Words.

The game was created by the same team who came up with the widely popular HQ Trivia. On HQ Trivia you compete in real time against players all over the world by answering to trivia questions. There is a live host who presents each question, and if you manage to pick the right answer on all the rounds (there are 12 in total) you win a cash prize, which is shared if there is more than one player with a perfect score. For some reason the game went viral in 2018, to a point where millions of people were competing at the same time. Initially the daily prize was just $100, but as the number of players and game sponsors grew that number ballooned to $25,000, with special events giving up as much as $400,000 as prize.

In order to reach a wider audience the team decided to launch new games. Earlier this year a sports version of the trivia game was introduced, and last week HQ words was launched.

How to Play HQ Words

The first thing you need to know is that you don’t need a separate mobile app to play HQ Words. The game runs inside the HQ Trivia mobile app (now called HQ – Trivia and Words) which you can find for both iOS and Android devices.

Second, the game is is still in its beta version, and it is not available to everyone. For this reason you might not find it inside the mobile. Until a couple of weeks ago players would need an invite to be able to play, but it looks like the team is gradually making the game available for more and more players, so just keep an eye on your mobile app until it becomes available to you. 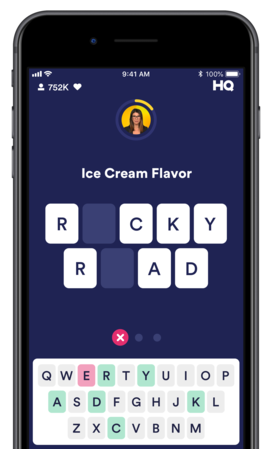 As for the gameplay itself, you basically need to solve word puzzles by guessing the hidden letters. The order in which you type the letters doesn’t matter as long as they are present in the world. You can also type up to two incorrect letters. Upon the third incorrect attempt you are eliminated from the game. At the beginning of each round you will also spin a wheel to get one random letter ultimately revealed from the word.

Much like HQ trivia, there are 10 rounds to go through, and the players who get all rounds correctly share the cash price. You can play the game daily at 6:30 PM Pacific Standard Time, and currently the daily cash prize is $200.

Are there HQ Words cheats?

HQ Trivia gained notoriety last year because many users relied on bots (i.e. computer software) to cheat and automatically get the correct answer to the proposed trivia questions from the Internet, beating players who didn’t have such help. Given the sizes that the prizes reached, such attempts to game the system were expected, but some people complained that the company behind the game didn’t put a lot of effort to combat the available mechanisms to cheat. Over time the structure of the game evolved (e.g. the time available to answer each question was reduced) and the problem was mitigated (though probably not entirely solved).

Unfortunately it looks like the same problem is happening on HQ Words. As you can see on the screenshot below, some users took around five seconds to complete all 10 word puzzles, which is humanly impossible. 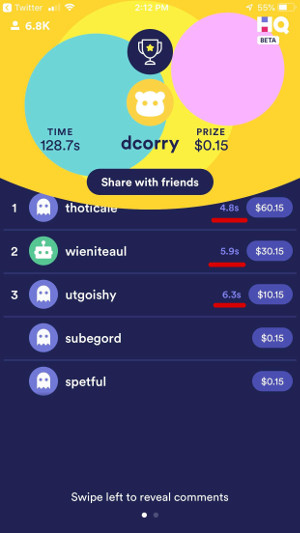 As we mentioned above, the game is still in its beta version, and it is likely that the development team will come up with changes to block cheats and bots. We hope they manage to do that, otherwise it will ruin the fun for the rest of us.

Tips and tricks to do well

If you are looking for tips and tricks to do well in the game without having to resort to the methods above, here are some that might help you:

1. Memorize the most common letters in the English language and use them when you believe they might be included in the hidden word. 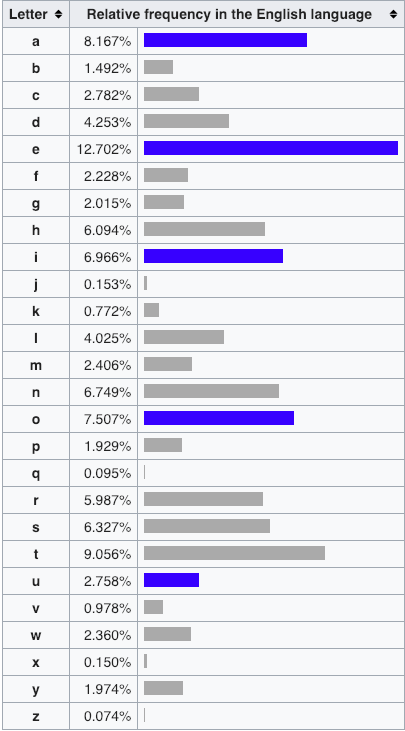 2. Try to come up with variations and synonyms of the provided hint.

3. In case of multiple hidden words, such as “back to school,” try to isolate and identify the article first.

4. Technically this could be considered cheating, but if you play with a friend in the same room you could double your chances of identifying the word by sharing the letters you are guessing.

Are you playing the game already? What do you think about it? Do you have other tips and tricks we have not mentioned? Leave a comment below with your opinion.