Oxford Comma: Yes or No? A Compilation of Opinions and Recommendations

First things first: what is the Oxford comma? Also called serial comma, it is a comma placed after the penultimate item in a list and before the conjunction “and” or “or.”

Here’s a sample sentence without the Oxford comma:

We traveled to China, Thailand and Japan.

And here is the same sentence with the Oxford comma:

We traveled to China, Thailand, and Japan.

The Oxford comma is the one after “Thailand.”

There is a hot debate around its use because this is technically an optional punctuation mark, and in some sentences it clearly helps understanding and removes ambiguity while in others it can be redundant. (Wikipedia has a list of arguments for and against the Oxford comma.) 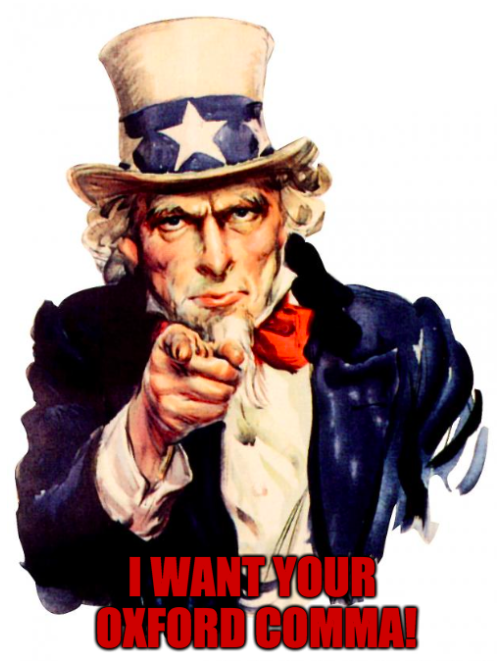 Making things worse, this punctuation device can sometimes have serious business implications. In 2017 a company settled for $5 million with its drivers because the absence of the Oxford comma in the law text created ambiguity about overtime compensation.

Author Lynne Truss once wrote: “There are people who embrace the Oxford comma, and people who don’t, and I’ll just say this: never get between these people when drink has been taken.”

Below you will find a compilation of opinions and recommendations from publications and style guides, so that you can decide for yourself whether or not to use it.

In favor of the Oxford comma

After a lifetime of being wishy-washy about the serial comma, I’ve reached a decision: I’m going to use it all the time. Such a momentous decision is, of course, a deeply personal matter. The pros and cons are widely, frequently, and hotly debated.

My choice is to travel the path of otiosity for the sake of uniformity.

I strongly favor the serial comma. Why?

In a sentence such as “I bought one apple, two bananas and three oranges,” no ambiguity exists. But in “I ordered ham and eggs, toast and jam and pie and ice cream,” the cavalcade of conjunctions gets confusing, and in contexts in which it’s not as clear which list items might be distinct and which might be linked, the absence of the final comma might require readers to reread the sentence to establish the organization. So, the solution in this case is to use a serial comma when confusion could arise.

I recommend using the serial comma in business writing, since it is the customary convention. And, to me, it is much easier to consistently follow this convention, than to omit it most of the time and add it in when clarity is needed. Keep it simple.

The Chicago Manual of Style

When a conjunction joins the last two elements in a series, a comma—known as the serial or series comma or the Oxford comma—should appear before the conjunction.

The Elements of Style

In a series of three or more terms with a single conjunction, use a comma after each term except the last.

Fair-weather comma users: publications that do not require the serial comma may use it only when misreading results. Proponents of the serial comma, like the MLA, would decry the inconsistency of the use-it-when-you-need-it approach and advocate using the serial comma in all series of three or more items or phrases.

Unless you’re writing for a particular publication or drafting an essay for school, whether or not you use the Oxford comma is generally up to you. However, omitting it can sometimes cause some strange misunderstandings.

Against the Oxford comma (with exceptions allowed)

I had orange juice, toast, and ham and eggs for breakfast.

Style guides for book and academic publishing generally would insist on another comma after “pears,” the so-called serial comma or Oxford comma. But news writing has traditionally omitted the serial comma — perhaps seeking a more rapid feeling in the prose, or perhaps to save time and effort in the old days of manual typesetting.

We do use the additional comma in cases where a sentence would be awkward or confusing without it: Choices for breakfast included oatmeal, muffins, and bacon and eggs.

Note that there is no comma between the penultimate item in a list and ‘and’/‘or’, unless required to prevent ambiguity – this is sometimes referred to as the ‘Oxford comma’. However, always insert a comma in this position if it would help prevent confusion

Put commas between elements of a series but not before the final and, or or nor unless that avoids confusion.

This discussion has basically two camps: those who favor the universal use of the Oxford comma for the sake of simplicity and uniformity; and those who are against it, except when it is necessary to remove ambiguity.

DailyWritingTips.com favors the universal use of the Oxford comma.

Keep learning! Browse the Punctuation category, check our popular posts, or choose a related post below:

11 Responses to “Oxford Comma: Yes or No? A Compilation of Opinions and Recommendations”