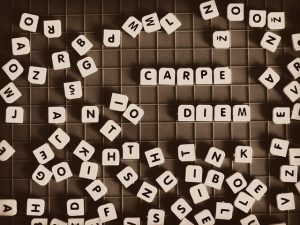 The phrase at the heart of the current impeachment process, quid pro quo, is unaltered Latin, but several words less obviously Latin have been sharing the spotlight. Their etymology is interesting.

castigate
More than one person involved in the hearings has been reported as “castigating” someone or other. The verb castigate comes from Latin castigare, “to chastise, correct, reprove.” The Latin verb derives from the Latin adjective castus, “pure.” The original idea is that the person doing the castigating is attempting to “purify” the person seen as acting improperly. Castigate is related to chastise. Both refer to an authoritative attempt to improve the behavior of someone.

corruption
In the context of the hearings, corruption applies to dishonest dealings in government. The word derives from a Latin verb meaning “to destroy.” Corruption in a physical sense is the breakdown of something solid into another state, as in the decay of a corpse. In the figurative sense of corrupting a government, it refers to influence by a bribe or other wrong motive.

dilatory
Several times the impeachment panel has been warned against the employment of “dilatory tactics.” In law, dilatory tactics are methods used to delay the progress of a proceeding so as to benefit the party that causes the delay. The Latin noun dilatorius means “one who delays; a delayer.”

impeachment
The word impeachment itself comes by way of Old French from Late Latin impedicare “to fetter, catch, entangle,” from the Latin prefix in plus pedica, the word for a shackle that restrains the feet. At first, the word was used in a broad legal sense to mean “bring charges against.” The current, more specific meaning, “to accuse a public officer of misconduct,” was in place by the end of the sixteenth century.

innuendo
This word came up in reference to efforts to damage the reputation of one of the participants “by fiction and innuendo.” Innuendo comes from the ablative gerund of innuere, “to nod to; to signify.” It suggests the modern expression, “a nod and a wink,” used of a situation in which someone expresses a thought indirectly or by making some sort of bodily signal like a nod, wink, or shrug.

intimidation
Latin timidus, “fearful,” gives us our adjective timid, “subject to fear, easily frightened.” Our verb intimidate means, “to inspire with fear.” The term “witness intimidation” refers to an attempt to discourage someone from testifying by threats or violence.

subpoena
In law, a subpoena is a writ issued from a court of justice or, in the case of the US impeachment hearing, by a Congressional committee. The subpoena examples I’ve seen on the web begin by saying, “You are commanded to…” or “Pursuant to such and such…” Some writs, however, begin with the words “Under penalty of. . .” and go on to state the recipient and purpose of the writ. Subpoena combines Latin sub, “under,” with poena, “penalty; punishment.”

And then there is the purely Latin expression, quid pro quo.

By now, surely everyone in the US knows that this oft-repeated phrase means, “this for that.” Not an ancient Latin coinage, the expression originated in the 1560s, when Latin was still the lingua franca of the medical profession. Nowadays, it is used in a general sense to refer to a conditional exchange, but it originated in a medical context. Unethical apothecaries (druggists) were known to substitute one drug for another in filling prescriptions. Doctors used the phrase in reference to the substitution of a prescribed drug with one of lesser quality.