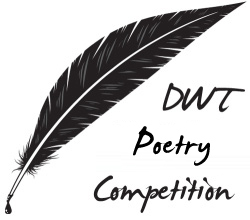 It is time to find out the winner of the first DWT Poetry Competition.

Only four poems were supposed to make it to the final, but on the second semi-final we had a small glitch with the closing time of the poll, and three poems were almost tied, so we promoted all of the to the final.

1. The Moon is My Cradle by Emily Comer

The moon is my cradle.
Through the long night;
The stars are my handmaids,
Lending their light.
The planets, my sisters, are dancing with joy,
To see the soft slumber
Of each girl and boy.
The earth is my slippers,
Heaven’s my crown;
And the air in between is
My shimmering gown.
The sky is the page
Where my portrait is drawn;
The sun is my mother,
And I am the Dawn!

2. The Invisible Entertainer by S. Winter-Hudelson

An hour before nine strikes,
He paces floors, forehead in hand.
Finally, Pianoman’s feet drag his body
to the bar

He enters Rosie’s and pours a Pabst,
Slips five-ones in his bowl
And slides behind the spinet,
seen by none.

He croons “Moon River”
Then a version in jazz to self-amuse
A lone fan cheers,
most are numb.

Breasts pressing his arm,
Two too red lips exhale stench to
Breathy beer strains of sexy songs
known to most.

A stupored couple staggers toward the stage
Holding more than dancing.
When beat and step don’t match,
neither cares.

The crowd, drowned in liquor downed long ago,
And four hours crawl to an end.
He covers the keys and rotely winds the cord
to his mic.

He exits stage left,
The bill-brimming bowl
Tucked under his arm,
his sole reward.

3. The Storm in My Black Belly by Bindu Saxena

When my lady held me – I quivered with dread; I knew of the ordeal that stretched ahead…

She took me at the corner, she took me in the street; I followed her swamped in a sense of defeat.

She took me to the market, the pavement, the stall; I tested my patience – no bicker, no brawl.

Invariably, too she would run into, “a friend.” And launched into chatter that signaled no end;

Her fingers fluttered, she waggled her head, secured in her palm – “I wished I were dead!”

And though, to her, this was joy & delight; it filled me with stark & unreasoning fright.

The minutes & hours plodded painfully by; her endless chatters & my battery, continued to dry!

Left, Right and Centre my face got pinched –until my lady’s ‘DATE’ was clinched!

She flew me skies, where I rested for a while; Network out, what a relief to my pout!

Here came Diwali. The fireworks, the celebrations , the lightings & thunder ..

For a friend anew, and Lo! Was I surrendered..

Back to Air Tel, from where had I come. Lay I appeased.

The drawings on the chapel are of a perfection such
Works of an artist to a future generation as much
And even that lady who’s armless and still
Holds everyone by the beauty she reveals
Where does it live
In Rome or in Greece?
The mythology tells us of a lady that’s perfect
Eminence among gods, a touch in the heart
And within pictures that a few pay attention
He enchants everyone with those unique creations
Ross when drew Aphrodite in his mythology
Had he created the perfect syncrony?
The beauty was so much, he got paralysed
Threw himself into the lake, drowned deep inside
But the symphony was so rare and magestic
Even the deafest one could create music
Beethoven’s tail or Narcism’s lake
How does it look like?
An ornamented chapel or an incomplete statue
Where would I, an average person, find you?
At the depths of a lake or the pictures of an artist
Where would I meet the one I have searched?
Then He told me I’d never find
Whilst I didn’t look at me inside.

Don’t shed a tear for the seven of us.
As we rot justly in a grimy, black cell, waiting for our true dwelling in hell.

Luxuria is now a shadow of an evil beauty that had once begotten men and women alike to fornicate, in a twisted form of love. Lust is the first to depart. At twilight we shall all be dancing a jig in hell.

Gula it’s never ending appetite now sated, has stopped its endless indulgence. Beckoning the end of famines, droughts, and vile addictions everywhere. Gluttony is the second to go. At twilight we shall all be dancing a jig in hell.

Individa filled with a deep hatred for those that hold what it cannot have. Is now appeased by what it wields. Envy is the third to follow. At twilight we shall all be dancing a jig in hell.

Avaritia now finished with its campaign for its selfish wealth and luxury. Its hoarded belongings now shared with all. Greed is the fourth in line to go. At twilight we shall all be dancing a jig in hell.

Acedia without a care of the world or itself, has now found meaning in its existence. Sloth is the fifth in line to go.
At twilight we shall all be dancing a jig in hell.

Ira its eternal anger now doused. It’s downfall heralding the end of violence and hatred. Wrath is the second to last to go. At twilight we shall all be dancing a jig in hell.

Superbia a never ending journey for fame, now cast aside by time forever to be forgotten. Pride proud of all the foul deeds it has committed, shouts before the gallows, with no hint of remorse.

“At twilight we all shall be dancing a jig in hell. But do not bid the seven of us adieu, and shed tears of joy at our departure. For before dawn we shall rejoin you all.” With a wicked smirk Pride is the last to go.

The word it has spoken resounding in our thoughts, filling them with angst, strife and fear…
Fear the hidden origin for all our sins.