For centuries, writers and critics have tried to put stories into basic categories. I’ve written about the scientific quest for universal plot types using the Hedonometer and the theories of Kurt Vonnegut. My colleague Mark Nichol has written about several lists of types of plots: three types, seven types, another seven types, twenty types, and thirty six types. Before I reread Mark’s article, I thought I could combine them all and write my own article called The 69 Types of Plots. Then I heard about the 1928 book Plotto, where dime store novelist William Wallace Cook comes up with 1,462 basic plots. So it never ends.

Is it really true that all stories fit into rigid plot types? Maybe not. Even Plotto‘s categories don’t always seem rigid to me. But human nature does dictate certain rules. There’s a reason why the Computational Story Laboratory’s Hedonometer has a story type “rise then fall then rise” but not one called “rise rise rise rise.” Our emotions need a contrasting break. If you write an experimental story without either conflict or plot or character development, the result will probably not be innovative so much as it will be boring. If you decide to be clever by not tying up any loose ends, you will succeed in frustrating your reader instead of delighting him. No, certain plots are universally attractive, even if we don’t understand why. Even business proposals are easier to adopt if they have a plot.

The theories of psychoanalyst Carl Jung has deeply influenced several list-makers, such as Joseph Campbell (The Hero with a Thousand Faces) and Christopher Booker (The Seven Basic Plots). Jung’s mythology has lost the lion’s share of the popularity it once held. But the fact that stories all over the world have common elements: that’s more than a theory. Joseph Campbell describes 17 stages from Departure, Initiation, and Return. Christopher Booker’s meta-plot has five elements:

Another theory which you might have learned in school says there are four types of plots. Here is my take on them:

When I looked at the lists in Mark’s article, I realized that some items are not mutually exclusive. Some lists have a different focus and basic types appear on more than one list. Also, your story can have more than one basic plot or conflict. The longer your story is, the longer you need to hold your reader’s interest, and the more plot elements or conflicts you will need to include. In Plotto, William Wallace Cook makes it to 1,462 by combining and recombining plot elements.

One common list of plot types (man against x, man against y, man against z, etc.) is actually a list of conflict types, several of which can appear in a single story.

In a classic amnesia tale, a man regains consciousness with no memory of who he is. He realizes he has driven his car off the road into a snowbank (or into a hole, making him a “man in a hole.”) He is able to start the car (person vs. technology) without freezing to death (person vs. nature). He goes to the home address on his driver’s license and convinces the hostile woman who answers the door – presumably his wife – to let him in (person vs. person) while hiding the fact that he doesn’t remember who she is. His personal calendar tells him he has an appointment in two hours, where he pretends to remember the woman he’s meeting with, learning that they are leaders in a criminal conspiracy (person vs. society). That night, he dreams about his family and associates, He is tempted to deny the evil that he sees (person vs. self) and the fact, as it turns out, that he has dreamed actual events (person vs. supernatural). Aware now of what kind of life he has led, he must decide whether to change his life or continue on the same destructive path (person vs. higher power).

Finally, here’s a list of all the plot types referred to in Mark Nichol’s article:

If that’s not enough, you can always try Plotto. The system is a little complicated, though. 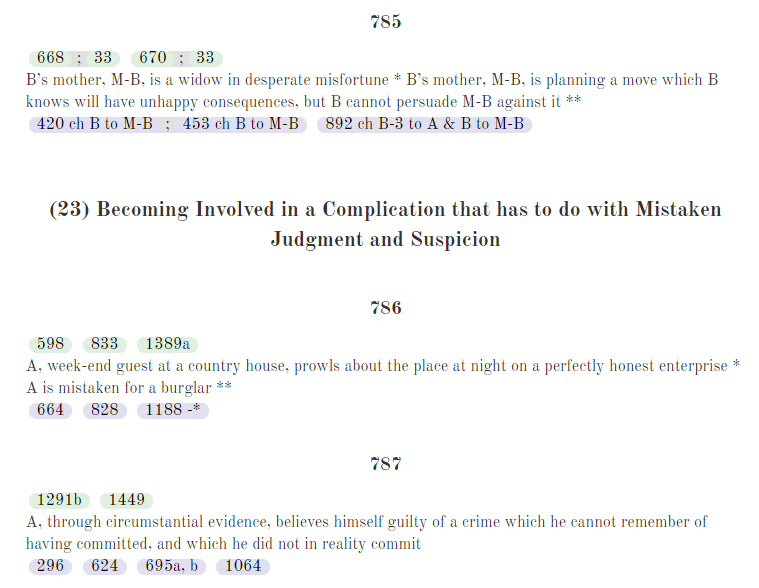